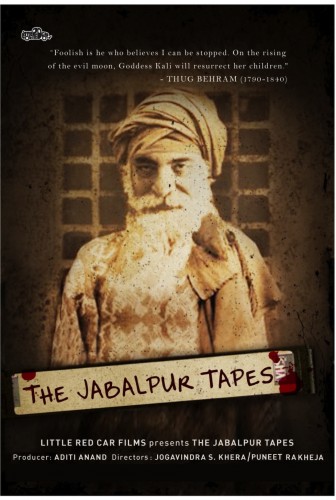 Never on record has there been an assemblage of killers as lethal as the Thugs.
Known as the children of Kali, for almost two hundred years this secret fraternity
haunted the roads of India, slaughtering travelers with such efficiency that nearly two
million men, women and children vanished without a trace.

Thug Behram holds the title of the world’s most prolific serial killer. Between 1790-
1840, Behram is credited with killing 931 Indians by way of strangulation; that’s
more killings than the Zodiac Killer, Charles Manson, Ted Bundy, David Berkowitz,
John Wayne Gacy, Jeffrey Dahmer and Andrei Chikatilo – combined. Behram was
caught and executed in 1840 by British civil servant, Sir William Sleeman. His final
words before he was hung were, “Foolish is he who believes I can be stopped. On the
rising of the evil moon, Goddess Kali will resurrect her children”.

Set in contemporary times, The Jabalpur Tapes brings to light the discovery of 37
highly classified VHS tapes that reveal the macabre events that transpired during
Assistant Sub-Inspector Kishen Lal’s final investigation. What is real? What is
supernatural? Are Thug Behram and his cult of Thuggies back? Or was Kishen Lal
chasing a copycat serial killer who knew his history to well? All is revealed in the
disturbing and perplexing found footage.